The VLAN hosts reside in their own broadcast domain and can interact /communicate quite freely. VLANs can build partition of network as well as separation of traffic at layer 2 of the OSI, and as we have discussed earlier about the need of routers, in order to host or if you want any other device to interact between VLANs, then it is essential to use layer-3 device.

The division of the LAN into multiple VLAN is basically the same like separating them into different physical LANs. In this case is clear that you will need a router if you want to go from one LAN to another.

Therefore, in order to carry out this function, a router with an interface for each VLAN is needed. The other way and the better way is usage of router that can support frame tagging with ISL protocol or 802.10q protocol in order to support trunk link. In this case router must be connected with on interface to the switch and that link must be trunk to make routing possible. The 2600 series router is considered as the most affordable router that can support ISL or 802.10q routing. The series that do not support ISL routing includes all old 1600, 1700, and 2500 series routers. From the figures you can get an idea that if you had a few VLANs only i.e. 2 or 3 then it is possible to get a router with 2 or 3 Fast Ethernet connections. GigaEthernet is highly recommended as it works well but Fast Ethernet is okay too. In the other figure you can notice that every router interface is connected to an access link. In other words, the interface IP addresses of every single router would eventually become the default gateway address for every host in every single VLAN. If there are more VLANs available to you as compared to router interfaces then you have two choices whether you can run ISL or 802.10q routing on one Fast Ethernet interface, or you can buy a 5000 series switch i.e. route switch module (RSM). The route switch module (RSM) can easily run on the backplane of the switch and it can support up to the range of 1005 VLANs. 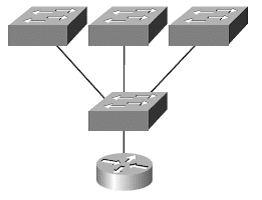 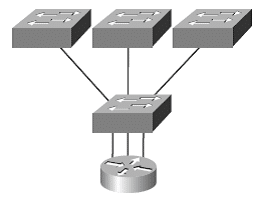 This article and all articles mentioned down here at the bottom are all about introducing virtual LANs and also about ways the Cisco switches can utilize them. We have also discussed about the breaking up of broadcast domain in a switched internetwork by VLANs. This is actually important as layer-2 switches breaks up collision domains only and, all switches combine to make up one big broadcast domain by default. The description of trunked VLANs opposite to a Fast Ethernet link is also given in this chapter. It is extremely importnat to understand the trunking technology well especially when you are managing a network with more than one switch operating several VLANs. In this chapter we have also covered a lot of information about VLAN Trunk Protocol (VTP), although it is not related to trunking. It sends VLAN information down to a trunked link that’s what you have learned in this chapter but actually the trunk configuration in itself is not related to or part of VTP.

If you need more about VLAN technology, consider this:

VRF – Virtual Routing and Forwarding
Network Virtualization
What is route recursion
How can router decide so fast?
WoL – Wake On LAN
/31 subnet in point-to-point links. Is that possible?