Block Traffic among two VLAN’s but only in one way, how to do that?

VLAN and VLAN configurations are very useful in all kinds of different ways. This configuration will be useful sooner or later for all network administrators out there.

It was a big challenge to resolve this tricky communication security requirement. The problem actually does not seem like a big deal but when you try to make it work you see that it is. 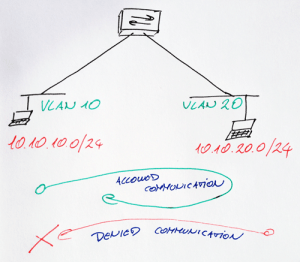 This kind of access list will allow traffic from one VLAN to another only if the communication is established in other direction before that. It can’t be used for IP traffic but only for every protocol separately so you will need to use more rows in ACL to allow TCP, ICPM etc, but it will solve your problem.

Here is how is done:

But, if you allow this communication to go back to VLAN 10, you will alow all the communication in both ways, and this is the problem that we can solve using reflexive ACLs.

We will make extended named ACL with name EASYONE:

Finally, we will put the ACL EASYONE to VLAN 20 L3 interface

To conclude the config without comments, indeed easy now when is done:

The credit for the solution goes to my mentor and friend Sandra who did the configuration and lab for it but more than that she came out with the established word at end of the ACL and whole reflexive ACL solution.