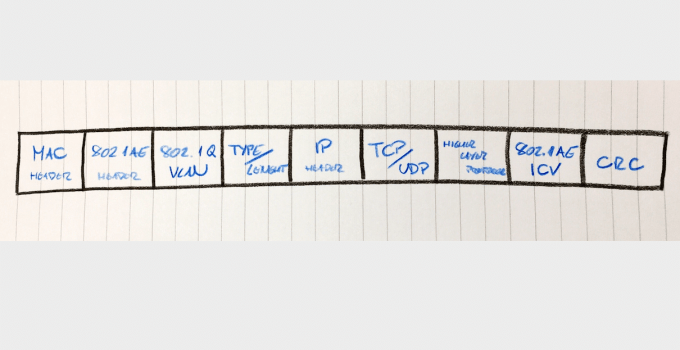 This article describes the simplest way to enable MACSec using preconfigured static key-string. The example was tried on Catalyst 3850 and should work on other switches too.

There is another article that I wrote years ago which describes a more complex implementation with dot1x etc.

When you configure MACsec on a switch interface (and of course, on the other switch connected to that interface), all traffic going through the link is secured using data integrity checks and encryption.

Data integrity is done by appending 8-byte header and a 16-byte trailer to the Ethernet packet which is generated before a data is sent and checked upon receiving on the other switch to prove that the data inside the frame was not modified on the way. If the check fails, the packet gets dropped.

END_OF_DOCUMENT_TOKEN_TO_BE_REPLACED

UPDATE on 11 Jul 2019:
I wrote a fresh article describing how to implement MACSec on Cisco devices in the simplest way possible. I think that one is maybe what most of you are searching for.. get it here

MACSec is standardized IEEE 802.1AE hop-by-hop encryption that enables confidentiality and integrity of data at layer 2.

If we compare MACSec with, for example, IPsec, MACsec provides same security but on layer 2 for each hop separately. On each hop, packets are received and decrypted enabling other features like QoS and load balancing to function. Same data is again encrypted before being sent out to next device on the way towards the destination. MACsec works on host-to-switch connection and on switch-to-switch connection enabling line-rate up to 10 GigabitEthernet fast encryption.

MACsec uses MACsec Key Agreement (MKA) which is standardized protocol to provide the required session keys and manages the required encryption keys on a MACSec connection between hosts (PC, server, etc.) and switch.

END_OF_DOCUMENT_TOKEN_TO_BE_REPLACED 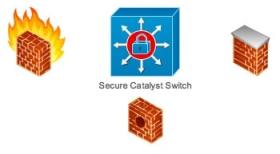 Cisco devices have many features that are good for something but they can be easily exploited. You must know that the Internet is full of people that want to exploit your network for different or no reasons. We will show you the best ways for thinking ahead and securing the layer 2 of the network – the switches. Let’s start…

END_OF_DOCUMENT_TOKEN_TO_BE_REPLACED 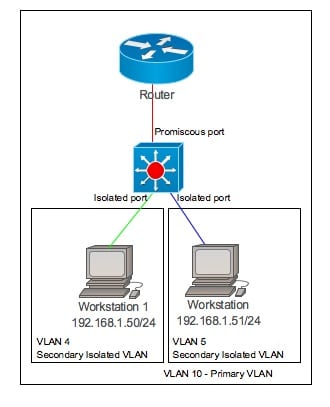 END_OF_DOCUMENT_TOKEN_TO_BE_REPLACED

In some cases you will need that some kind of server, PC or other network device receives a copy of network traffic that is destinated for some other device in the network. Why would you want that? Maybe you need some kind of control of the traffic or you want to implement IDS – Intrusion Detection System or something else. In that case you can configure every Cisco switch to send a copy of the traffic to one of the ports that is connected to sensor device.

END_OF_DOCUMENT_TOKEN_TO_BE_REPLACED

SPAN – Switched Port Analyzer technology and configuration was last modified: March 6th, 2012 by Valter Popeskic
ALL ARTICLES IN ONE PLACE