QKD – Quantum key distribution is the magic part of quantum cryptography. Every other part of this new cryptography mechanism remains the same as in standard cryptography techniques currently used.

By using quantum particles which behave under rules of quantum mechanics, keys can be generated and distributed to receiver side in completely safe way. Quantum mechanics principle, which describes the base rule protecting the exchange of keys, is Heisenberg’s Uncertainty Principle.

Heisenberg’s Uncertainty Principle states that it is impossible to measure both speed and current position of quantum particles at the same time. It furthermore states that the state of observed particle will change if and when measured. This fairly negative axiom which says that measurement couldn’t be done without perturbing the system is used in positive way by quantum key distribution.

It a real communication system, if somebody tries to intercept photon-powered communication so that it can get the crypto key which is being generated by this photon transfer, it will need to squeeze transferred photons through its polarization filter to read information encoded on them. As soon as it tries with wrong filter it will send forward the wrong photon. Sender and receiver will notice the disparity in exchanged data and interpret it as detection of interception. They will then restart the process of new crypto key generation.

Photon, and how it is used?

1) Photon – Smallest particle of light is a photon. It has three types of spins: horizontal, vertical and diagonal which can be imagined as right to left polarization.

2) Polarization – Polarization is used to polarize a photon. Polarize the photon means to filter the particle through polarization filter in order to filter out unwanted types of spins. Photon has all three spin states at the same time. We can manipulate the spin of a photon by putting the filter on its path. Photon, when passed through the polarization filter, has particular spin that filter lets through.

3) Spin – The Spin is usually the most complicated property to describe. It is a property of some elementary particle like electron and photon. When they move through a magnetic field, they will be deflected like they have same properties of little magnets.

Modern technology advanced and today it is possible to use LEDs as source of single photon. In this way string of photons is created which will then be used in quantum channel for key generation and distribution in quantum key distribution process between sender and receiver.

Normal optic networking devices use LED light sources which are creating photon bursts instead of individual photons. In quantum cryptography one single photon at a time needs to be sent in order to have the chance to polarize it on the entrance into optic channel and check the polarization on the exit side.

Most technically challenging part of data transmission encoded in individual photon is the technique to read the encoded bit of data out from each photon. How’s possible to read the bit encoded in the photon when the very essence of quantum physics is making the measurement of quantum state impossible without perturbations? There is an exception.

We attach one bit of data to each photon by polarizing each individual photon. Polarizing photons is done by filtering photon through polarization filter. Polarized photon is send across quantum channel towards receiver on other side.

Heisenberg’s Uncertainty Principle come into the experiment with the rule that photon, when polarized, cannot be measured again because the measurement will change its state (ratio between different spins).

Fortunately, there is an exception in Uncertainty Principle which enables the measurement but only in special cases when measurement of the photon spin properties is done with a device (filter in this case) whose quantum state is compatible with measured particle.

In a case when photons vertical spin is measured with diagonal filter, photon will be absorbed by the filter or the filter will change photon’s spin properties. By changing the properties photon will pass through the filter but it will get diagonal spin. In both cases information which was sent from sender is lost on receiver side.

List of spin that we can produce when different polarization filter is used:

The technique of data transmission using photons in order to generate a secure key at quantum level is usually referred as Quantum Key Distribution process. Sometimes QKD is also wrongly referenced as Quantum Cryptography. QKD is only a part of Quantum Crypto.

Key Distribution/Generation using photon properties like spin is solved by Quantum Key Distribution protocols allowing the exchange of a crypto key with – laws of physics guaranteed – security. When finally generated, key is absolutely secure and can be further used with all sorts of conventional crypto algorithms.

Quantum Key Distribution protocols that are commonly mentioned and mostly in use in today’s implementations are BB84 protocol and SARG protocol.

BB84 is the first one invented and it is still commonly used. It is the first one to be described in the papers like this one which are trying to describe how Quantum key exchange works. SARG was created later as an enhancement which brought a different way of key sifting technique which is described later in this paper.

Key Exchange phase, sometimes referred as Raw Key Exchange giving the anticipation of future need for Key Sifting is a technique equal for both listed Quantum Key Distribution protocols BB84 and SARG. To be able to transfer numeric (binary) information across quantum channel we need to apply specific encoding to different photon states. For Example, encoding will be applied as in the Table 1 below making different photon spin carry different binary value. 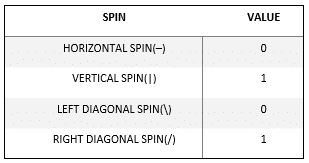 In the process of key distribution, first step is for sender to apply polarization on sent photons and take a note of applied polarization. For this to be an example, we will take the Table 2 below as the list of sent photons with their polarization information listed.

If the system will work with integers this data can be formatted in integer format:

2) Reading Information bits on the receiver side

The question arises on how can we use above described properties of photon and still be able to actually read it on the receiver side. In the above step, photons with the information attached to them were sent to the receiver side.

The next step will describe how quantum key distribution, and with that the whole quantum cryptography, works.

While sending, a list is made, list containing each sent photon, sent from sender to receiver and polarized with specific spin (encoded a bit of information on each photon).

In optimal case, when sender sends a photon with vertical spin and receiver also applies vertical filter in the time of photon arrival, they will successfully transfer a bit of data using quantum particle (photon). In a less optimal case when a photon with vertical spin is measured with diagonal filter the outcome will be photon with diagonal spin or no photon at all. The latter will happen if the photon is absorbed by the filter. In this case, transferred bit of data will later get dumped in the phase of key sifting or key verification.

Key verification comes into play now and it is usually referred as Key Sifting process.

In BB84 protocol receiver will communicate with sender and give him the list of applied filters for every received photon. Sender will analyze that list and respond with a shorter list back. That list is made by leaving out the instances where sender and receiver used different filters in single photon transfer.

In SARG protocol receiver will give to sender the list of results he produced from each received photons without sending filter orientation used (difference from BB84). Sender then needs to use that list plus his applied polarization while sending to deduce the orientation of the filter used by receiver. Sender then unveils to the receiver for which transfers he is able to deduce the polarization. Sender and receiver will discard all other cases.

In this whole process, sending of polarized photons is done through special line of optical fiber cable.

If we take BB84 for example, Key sifting process is done by receiver sending to the sender only the list of applied polarization in each photon transfer. Receiver does not send the spin or the value he got as a result from that transfer. Having that in mind, it is clear that communication channel for key verification must not be a quantum channel but rather a normal communication channel with not even the need to have encryption applied. Receiver and sender are exchanging the data that is only locally significant to their process of deducing in which steps they succeeded to send one polarized photon and read the photon one bit of information on the other side.

In the end of Key Sifting process, taking that no eavesdropping happened, both sides will be in possession of exactly the same cryptographic key. The key after sifting process will be half of the original raw key length when BB84 is used or a quarter with SARG. Other bits will be discarded in the sifting process.

On average, eavesdropper which is trying to intercept photons will use wrong filter polarization in half of the cases. By doing this, state of those photons will be changed making errors in the raw key exchange by the emitter and receiver.

It is basically the same thing which happens if receiver uses wrong filter while trying to read photon polarization or when the same wrong filter is used by an eavesdropper.

In both cases, to prove the integrity of the key, it is enough that sender and receiver are checking for the errors in the sequence or raw key exchange.

Some other thing can cause raw key exchange errors, not only eavesdropping. Hardware component issues and imperfections, environmental causes to the quantum channel can also cause photon loss or polarization change. All those errors are categorized as a possible eavesdropper detection and are filtered out in key sifting. To be sure how much information eavesdropper could have gathered in the process, key distillation is used.

When we have a sifted key, to remove errors and information that an eavesdropper could have gained, sifted key must be processed again. The key after key distillation will be secured enough to be used as secret key.

First out of two steps is to correct all possible errors in the key which is done using a classical error correction protocol. In this step we will have an output of error rate which happened. This error rate estimate we can calculate the amount of information the eavesdropper could have about the key.

Second step is privacy amplification which will use compression on the key to squeeze the information of the eavesdropper. The compression factor depends proportionately on the error rate.

Flowing text is part of a ongoing academic project I’m involved with for the last few years at University of Rijeka – Department of Informatics. It’s a part of academic paper written as a short overview of Quantum Key Distribution technique – QKD. Topics in this paper are edited and transformed in few articles here describing QKD:
QKD – How Quantum Cryptography Key Distribution Works was last modified: December 1st, 2016 by Valter Popeskic