Firewalls from Cisco are smarter than that, PIX and Cisco ASA – Adaptive Security Appliance have the possibility to dynamically inspect calls packets and read the setup protocol traffic like H.323 to learn the used UDP ports for every RTP flows. The firewall will then open those UDP ports for the duration of the RTP connection and then close those ports again. 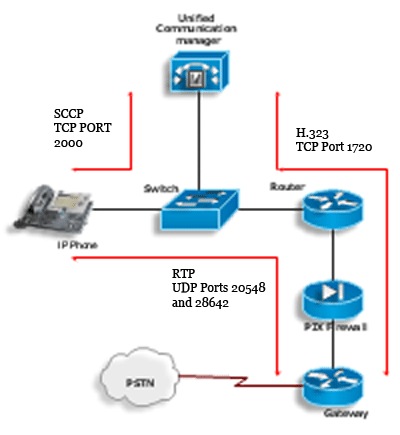 Let’s be clearer about this. In the image here you can see that the first thing that happens is the Phone’s usage of SCCP protocol to initiate a call to the PSTN.

SCCP uses TCP port 2000 will make the communication between the Cisco IP Phone and the UCM server possible. After the communication is established UCM is reading the numbers dialed by user’s phone and using this numbers he is deciding that the call needs to be sent out the H.323 gateway.

In the next step, using TCP port 1720, UCM initiates a call setup with the H.323 gateway. The firewall will allow the communication between these devices using H.323 protocol. The firewall will also analyze H.323 data and determine which UDP ports are in use for the voice path.

The next step is important because the firewall will need to allow bidirectional RTP communication. There will be need for two random UDP ports, every one for one direction of communication. Let’s take an example in which UDP ports 20,548 and 28,642 are selected. Firewall analyzes the H.323 protocol and based on this information dynamically learns about UDP ports that are used. The firewall then permits the RTP flow in every direction until the call is over.

There’s not only the ability to deny or permit some ports. The firewall may have some additional methods of protection of voice network. Let’s say that someone is attacking our VoIP network with DoS attack. In that case firewall has the ability to see that there are too many messages of a certain type sent in a short period of time. In some other case a firewall can be configured to use of policies, in that configuration a firewall can determine if necessary which phone to block.

Biggest part of Cisco IP phones can authenticate and encrypt call packets on the network. Some other phones from Cisco and other vendors don’t have this capability. If you however want to implement encryption and authentication in you voice network is not impossible. The solution is to use IPsec-protected VPN tunnel to send all call traffic across the network.