Routing decision on a router

Contrary to user end device like iPhone or Notebook which usually have only one way out of local network using broadband home router as Internet access default gateway, routers across the network usually have multiple network subnets each connected to one of their interfaces. That makes them able to route traffic out on different interfaces forwarding that traffic across different paths. If router receives the packet that is destined to some destination IP address it goes through similar list of questions like the end host in the example above, but it can became more complicated. Router receives the packet, opens the IP header and reads the destination IP address. After that the questions for him to solve are these:

Routing recursion is a recursive search process of routers routing table where the next-hop IP address is wanted to route packed towards its destination but when found it is not part of any directly connected network.

Usually, Router checks the destination address inside packets IP header and makes the decision based of few steps described in the routing example above.

When router finds longest match route for wanted destination, the next-hop value for this prefix is read and checked. If that longest match next-hop IP address value is a connected route then outgoing interface is known and layer 2 address is found which enables the frame to be built and transition of the packet can be done towards the destination.

Here is an example that will show the recursive lookup within a simple topology and routing table from R1: 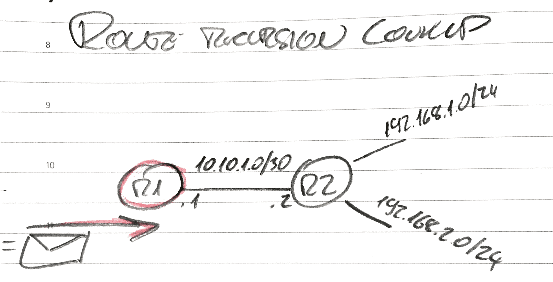 Process used by router R1 in the example above is called recursive lookup because router needed to go across the routing table twice in order to find the out interface.

When a route table entry shows next-hop IP address and not a directly connected exit interface, recursive lookup is needed. Therefore another lookup has to be made. There can be more lookups, until the route with exit interface specified is found.

REFERENCE and UPDATE NOTICE:
For further reading on routing table topics I have one article particularly related to this one. Is an older article here which describes the difference between static route defined with next-hop address and one defined with out interface:  Difference between defining static routes with next-hop address or exit interface

Please comment if you have any info regarding this case.

UPDATE on 22 Dec 2015:
Thanks to Dmitry I took some time and corrected several unintentional errors and outdated parts of the articles that were not relevant in network devices today.

Unintentional was the part with “This additional routing table lookup process is known as recursive lookup”. It is true, Recursive means keep looking until you find next-hop and outgoing interface or drop the packet, so it is correct to say: “This additional routing table lookups are known as recursive lookups.” taking into account more of them if more of them are needed not only the first additional lookup.

Also, giving the example at the beginning about Routing decision on end devices did not state clearly that is an example for a device connected to Ethernet network. I made that clear now.

Outdated part was my last tip at the end of the article saying that “It is always better in order to get the best routing performance that every route table entry is defined with outgoing Interface and not next-hop address”. I’m silly, we have route-cache mechanisms like Cisco CEF in our network devices which enable us to skip routing table lookup every time same destination is needed. This TIP is about network devices older than me. I removed that last paragraph. The reasons why it does not matter is explained in this one: How can router decide so fast?