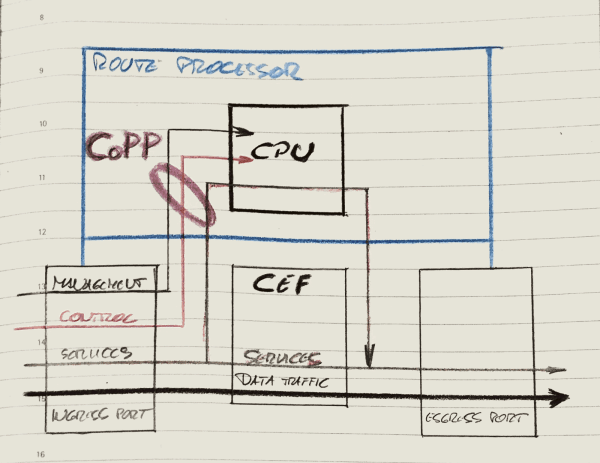 Class-map type port-filter allows for automatically dropping of packets destined for the TCP/UDP ports not currently open in the router. The operating system automatically detects all open ports, and you can manually configure some exceptions. This can significantly reduce load on device CPU during flooding attacks.

If traffic destined to Route Processor is not TCP/UDP, that kind of control traffic ends up on the CEF exception sub-interface.

Per-protocol queue thresholds set selective queue limits for packets of different protocols, such as ICMP, BGP, OSPF, etc. We have in our example below policy-map ICMP_RATE_LIMIT which will catch all ICMP packets and do some rate policing on them.

This sub-interface is handles transit IP traffic that is not able to be handled by faster hardware CEF mechanism. This usually happens when a packet must be routed out of Ethernet interface and there is no ARP mapping done already for that MAC. In this case we will be switching in the processor by making ARP lookup to find the next-hop MAC address.

Like the name says, packet that causes an exception in CEF switching ends up here. Example of this kind of traffic is non-IP traffic destined to router itself, CDP, OSPF updates, and ARP packets.

How Control Plane Protection works and how is configured

Before packets reach one of specific control plane sub-interfaces, they are processed with more different ingress features. Packets are going through input access-list, uRP checks and aggregate control-plane policy if one is configured. After this, packets are forwarded to sub-interface-specific policy, the packets are then queued onto the respective interface input queue and handled via selective packet discard policy.

Here’s the example of Control Plane Protection. I’ll just put the example here and the explanation, bullet by bullet at the bottom.

The class-map type port-filter is really cool. It allows to match some of the ports (like 2323 and 2424 in our example). The best part is that you are able to match all closed ports on the router dynamically and drop packets destined to non-listening ports before the router process them and responds with ICMP unreachable or TCP RST packet.