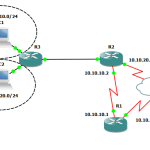 Static Floating Routes are very interesting so I decided to give you a short description and an example.

A static floating route is the same as normal static route except that this kind of static route has administrative distance configured to some value higher than 1.

Remember that if we configure normal static route like this:

Of course, this static route will have administrative distance (AD) of 1 by default.

In this case, the AD will be zero (0). Pretty cool right? There’s another article about that here.

But what if we want to use a static route to make something completely opposite?

If we want to use static route only to be a backup route. Then we will need to give the precedence to the path learned by some IGP (Interior Gateway Protocol) like OSPF for example. We know that most paths (routes) learned by OSPF protocol have Administrative Distance of 110. In that case, the Administrative distance of a static route needs to be bigger than 110 if we don’t want to kick out the OSPF route from routing table.

If you see this configuration above, you will notice that after next-hop address 10.10.10.2 there is number 200 added. This part of the command will override the default Administrative distance of the route 1 and configure the same static route with an administrative distance of 200. That’s why this static route will not enter the routing table until there is OSPF path to the subnet 172.16.10.0/24. If for some reason the router R1 loses the prefix 172.16.10.0 learned by OSPF it will then use the static FLOATING route configured above.

That’s why this static route will not enter the routing table until there is OSPF path to the subnet 172.16.10.0/24. If for some reason the router R1 loses the prefix 172.16.10.0 learned by OSPF it will then use the static FLOATING route configured above.

This is where the name static floating is coming from? Yes!  This kind of static route is able to enter and exit the routing table base on other routes to the same subnet learned from some IGP in the process.

That is the main difference between „normal“ static route and floating one. The normal static route is permanently entered in the routing table and the floating static is not. 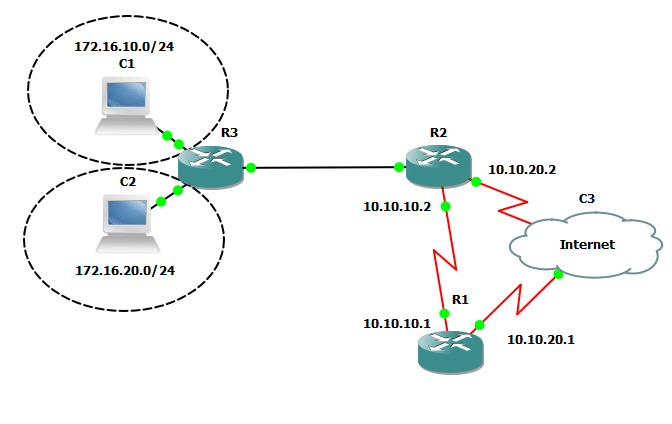 I made a simple example to show how this works. Let’s say that R1 is a branch router that will use a floating static route to send Enterprise traffic across the Internet but only if the leased line is broken or when the IGP-learned path across the private link fails. This is a normal situation where some branch office is connected to the company infrastructure with a private link and uses Internet connection for the backup.

Basically, if there would be any communication break on the leased line, the static floating route would direct that traffic across the Internet. In that way, the communication will not experience any outage and the leased line will be used at his best using IGP protocol when online.

What is static floating route was last modified: September 15th, 2017 by Valter Popeskic