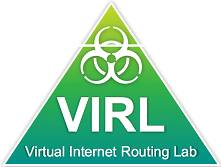 Yes, there is GNS3 for years now but to be sincere, I tried to use if for some design and troubleshooting sessions and it is so time-consuming to set everything to work right that is was at the end easier to do it on a piece of paper. We want something to model a network topology and to be able to run it as it was a real deal. Yes, it will be possible finally using Cisco VIRL. Fellow from Cisco did actually a great job setting up this kind of tool that will runn all the different varieties of IOS:

As you can see from this list there will be a way to run expensive high-end models of routers and switches and do some labbing, design and testing with them without the use real devices. In this way our computer or server resources will run those routing and switching platforms in virtualised environment. This will be a real Disneyland for networking engineer. It will enable us to drive all kind of Cisco devices in this virtual lab and configure them and try them how are they working together. It will be possible even to copy the config to real devices as the IOS will be the same as on real device.

What is network engineers day at work like? There is a major part of days where we are sitting in front of some device and staring at command line. We are basically just testing the gear and making some lab environment where we can proof that some settings of device are working as they are described by big and thick admin guides. We are making tests and labs for those tests. There is nothing implemented before is configured and there is a demonstration as a proof that this will work in production. But why we need to spend a fortune to get those devices for learning purpose. Cisco did get this today. They did realise that device brand is mostly chosen by the knowledge that the engineers have of those equipment. There is a saying that Cisco is chosen by most of engineers because nobody until now did get fired by picking Cisco equipment among all other vendors. Maybe is exaggerated but there is some true inside that sentence. If your engineers know in deep how Cisco is configured they will not be happy about HP switch regardless of the quality and the price.

Our world with VIRL

Cisco made the greatest learning tool a reality and it will probably potentiate even more people to learn networking on Cisco equipment. Now with VIRL coming out this winter it will be a situation where Cisco has best documentation, best award-winning Learning program, best award-winning Certification tracks and finally the ultimate and maybe even free lab tool. Perfect.

VIRL will be network simulation system that is based on OpenStack. It will have a nice GUI that will enable us easy drag-and-drop network topology creation. It will also be able to auto-generate the starting configuration to save us some more time. After that you will be able to start the simulation which means that you will start a virtual topology realised as a running network of virtual machines that are running Cisco device IOS operating system.

VIRL is not published yet but is was presented as a demo on Cisco Live in Orlando a month ago so that’s the proof that all this are not only stories but it’s real. Cisco fellows need to do some finishing touches and it will hopefully be out in january as from some info from CLUS. It will help me to try devices that I do not have in small environments and networks in the region. More than that it will make the learning much faster, cheaper and finally more fun for all you Cisco guys out there spending hundreds of dollars on rack time these days.

We are waiting, if you know more about it, please comment!