What is Routing and what Static and Dynamic routes means? 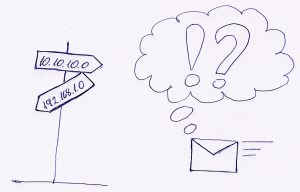 In the theory of networking, we must mention the concept of routing to help explain how networking works and what exactly is networking. Simply, the word “routing” is meant by map-reading or direction-finding. But in the computer’s world, it is a system for forwarding the information from some network node to another over an internetwork such as from a starting point (source) to its ending point (destination).

The functions of routing components, which are two basically, are to: settle on the best possible routing paths, and to transport the bulk information usually in the form of packets with the help of an internetwork. Besides this, there are two main divisions of the routing process as well, and these are named as: static and dynamic routing.

Therefore, routing can be either configured in the static form or the dynamic form over a network device. But in case of the static routing, paths or routes are scheduled as hard-coded on the network devices. And these defined routes tell to the machine, to throw the online traffic on the specified route. You can say, static routing is a method to communicate data concept that describes the way to configure selected routers paths inside a network. Static routing is achieved by adding routes manually to specific routing table. These fixed routes are entered by administrator via a data network. Static routing configuration is having no fault tolerant ability.

Therefore, in case of any change in the network such as when a failure between two statically configured nodes is occurred then traffic route will remain the same and no change will be made for data transferring. But the journey of data forwarding will restart only when updating regarding routes is made by the administrator by hand. For your understanding the following example is given with respect to the static route configuration to a R1 router. With this configuration of static route on R1, router will be able to determine the interface that is the best path that leads to network 10.10.10.0/ 24. In that case, router will forward packet correctly to the next routers interface. The other, neighbor router R2 will then send that packet to computer with IP address 10.10.10.3 in the 10.10.10.0/24 network. This is because 10.10.10.0/24 network is directly connected to R2 router. This configuration example is made with the help of command-line syntax (Cisco IOS) for Cisco routers: 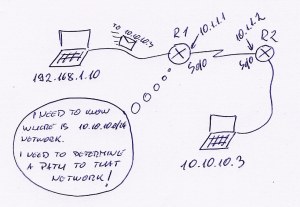 There are two ways to configure IP route on the Cisco router, using the next-hop address or using the exit interface.

Keep in mind that 10.1.1.2 is IP address of the neighbor R2 router and this route will lead to his interface.

In the next example the IP route is configured with exit interface. We tell router on which interface must the packet be forwarded out to get on the right road to its destination:

Always remember that when more than one route is possible to the same end source then routers may use administrative distance (lower number route for a trustworthy path) in order to reach to a decision about a most suitable static route Moreover, a special type of static route “default route” can be achieved when route will be “zero / zero” and network as well as subnet for the traffic are the same as destination.

Now come to the dynamic type of routing that at times is identified as “adaptive routing”. Dynamic routes with the support of routing protocols (RIP, OSPF, BGP or EIGRP) can determine the best path for sending the online traffic. But if during the forwarding process, a route turns into less ideal, at that time, another route can be chosen for the packets delivery function. Moreover, dynamic routes are able to exchange information with each other for the purpose of exact routing.

Routing devices run specific software applications to support the dynamic routing protocols. Actually, a routing device is able to learn dynamically about network destinations in addition to advertising these destinations to some other routers.

The benefit of advertisement function is that a dynamically configured router becomes able to learn the all routs to all those networks that are in a straight line allied to the device. Dynamic routing protocols like RIP can distribute the information about best route to other routers as well, running the similar routing protocol.

Routing – Static and Dynamic routes – What is route? was last modified: January 8th, 2012 by Valter Popeskic