The concept behind the design of DoS attack is interfering in the normal functions of a server, web site, or other resources of a network. The hackers and even the virus writers can use number of ways in order to get this job done. One of the most common methods is flooding a server with heavy traffic from network so that it becomes difficult to control it. As a result of this heavy traffic it is not possible to carry out the normal functions properly and sometimes this can further lead to server crash.

There is not much difference in DDoS attack and DoS attack as both are designed to create hindrance in the normal functions of a server, web site, or other network resources. In case of DDoS attack the attack takes place with the help of multiple machines which makes it different from DoS attack.

Here are the symptoms of denial-of-service attacks:

The problems due to denial-of-service attacks are not limited to the computer that is being attacked but it also causes troubles to the network ‘branches’ around it. Here is an example, the router’s bandwidth between the LAN and the Internet may be consumed by an attack, and this can spread to the whole network.

If the attack takes place on a big scale, then the internet connectivity of the whole geographical region can be affected without the knowledge or intention of attacker and this happens due to incorrect configuration or due to use of weak network infrastructure device. 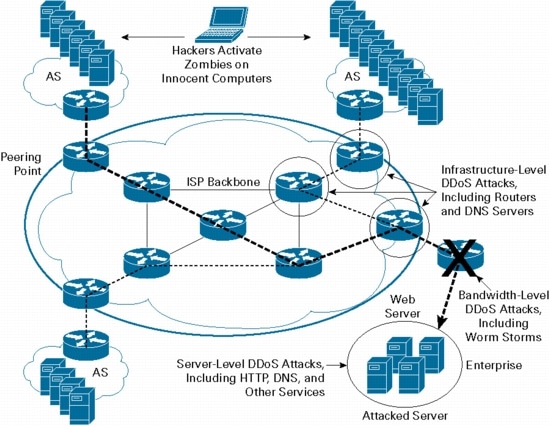 If you need more about DoS and DDoS attacks, consider this: