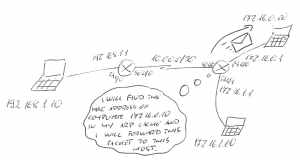 A routing protocol is different and is only used between routers. It makes possible for routers to build and maintain routing tables. There are three classes of routing protocols:

OSPF is one of two link state protocols, the other one is IS-IS. EIGRP is the only hybrid protocol but in normal literature you will see that EIGRP is distance vector routing protocol. If you ask Cisco, they are speaking about EIGRP as Enhanced Distance vector routing protocol. Every other routing protocol is also from distance vector category. There are RIP, RIPv2 and BGP. Every protocol has a different administrative distance, RIP is 120, IGRP is 100, EIGRP 90, OSPF 110 and that static routes normally have a lower administrative distance than every other route, if you use the defaults a static router is 1 and a directly connected router is 0.