MAC address, what that means and what MAC address actually is?

The Layer 2 address is unique on the local network and represents the address of the end device on the physical media. In a LAN using Ethernet, this address is called the Media Access Control (MAC) address. When two end devices communicate on the local Ethernet network, the frames that are exchanged between them contain the destination and source MAC addresses. So we can say that unique identifier called a Media Access Control (MAC) address was created to help in finding the source and destination address in an Ethernet network. MAC addressing is added as part of a Layer 2 ethernet frame. An Ethernet MAC address is a 48-bit binary value expressed as 12 hexadecimal digits.

Both media access control and medium access control are the elaborated forms of the same term “MAC” address. For the proper and to the point communication between a network’s computers, MAC address is used to identify uniquely each network interface.

Structure of the MAC address and who is making it?

Assignment of addresses is controlled by the IEEE Standards Association (IEEE-SA), which administers a portion of the address field. The IEEE-SA provides a 24-bit Organizationally Unique Identifier (OUI) to the vendors. Then the vendors must use this 24-bit as a start for every MAC address of their network product interface card. This blocks of addresses for use by network vendors, the OUI is a unique 24-bit identifier assigned to each organization that builds network interfaces. This allows a vendor of Ethernet equipment to provide a unique address for each interface they build. Providing unique addresses during manufacturing avoids the problem of two or more Ethernet interfaces in a network having the same address. This also eliminates any need to locally administer and manage Ethernet addresses.

A manufacturer of Ethernet interfaces creates a unique 48-bit Ethernet address for each interface by using their assigned OUI for the first 24 bits of the address. The vendor then assigns the next 24 bits, being careful to ensure that each address is unique. This is mostly done by giving the next 24 bits in order from 1 to 224. The resulting 48-bit address is often called the hardware, or physical, address to make the point that the address has been assigned to the Ethernet interface. It is also called a Media Access Control (MAC) address, since the Ethernet media access control system includes the frame and its addressing. 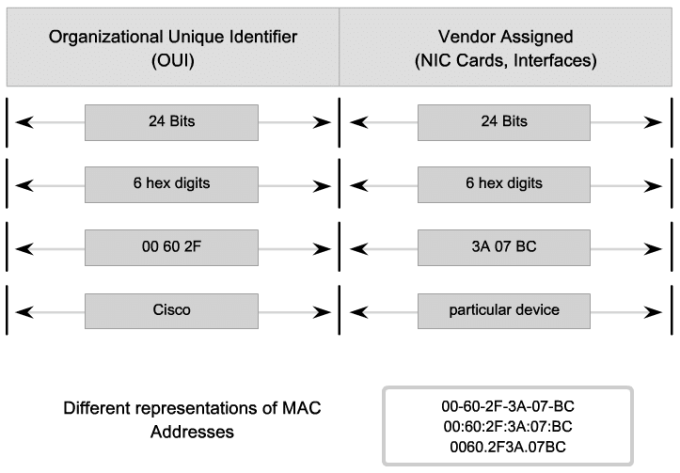 Well! These addresses can be employed with different network technologies such as IEEE 802. MAC as the data link layer’s sublayer protocol is the important logical portion of OSI reference model. Such addresses are usually assigned by the NIC manufacturer of a network. Anyhow, these addresses are resided in the card’s ROM (read-only memory) or somewhere else in the firmware instruments. In case, if manufacturers are the authorities to assign them, then MAC address will known as “burned-in address” or “EHA (Ethernet hardware address). A computer if it is a host then can have more than one NIC. But remember, only one unique MAC address will be assigned to every NIC device in this situation. Besides these, MAC addresses will be produced in accordance with the one of the following 3 name spaces numbering rules: MAC-48, EUI-48, and EUI-64 rules. But this target of addresses production is controlled and handled by the IEEE (institute of electrical and electronics engineers) who claimed EUI (Extended Unique Identifier)-48 and EUI (Extended Unique Identifier)-64 names as their trademarks. But all the above mentioned 3 name numbering systems have the similar layout. However, identifier length is simply the difference amongst them. Keep one more thing in your mind that is, MAC-48 name space numbering system is reserved for the network hardware while EUI-48 will be used to classify further devices and as well software. Running body of these MAC addresses is either a universal or a local entity. As a result, these addresses are either:

Moreover, those addresses that fall under the first category (universally administered address) are assigned exclusively by the device manufacturers. These so called burned-in addresses have first 3 octets for the organization identification but next 3 octets in case of MAC-48 and EUI-48 and next five in case of EUI-64 octets are allocated by an organization handling these addresses uniqueness limits.
There is a method to distinguish universally administered MAC addresses from the locally administered MAC addresses and that is by means of setting the 2nd least significant (important) bit of an address, most significant (important) byte. That U/L (Universal/Local) bit then identifies how an address will be administered. For example, if a bit value is 0 then it will be universally administered, otherwise, address will be locally administered (when bit value is 1).
Moreover, MAC-48 addresses (IEEE 802) printing standard format is 6 clusters of 2 hexadecimal digits. Hyphen and colons can be used as these addresses digits separators e.g. 01-23-46-68-88-ab or 01:23:46:68:88:ab (EUI-64 form).
For a network construction, different technologies are using MAC-48 identifier with a set of connections. Some well known technologies are as following:

But EUI-64 identifiers can be used in the following technologies